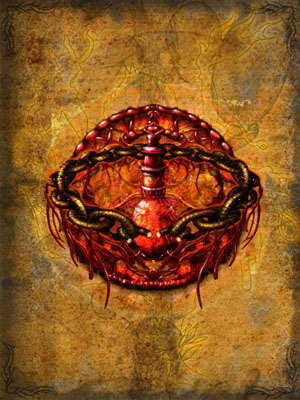 From the Books of Religion
Book 6

This book has different text with the Community Patch. You can read original version here.

Ker, Goddess of evil. She is the destroyer, the bringer of darkness.

The symbol of the church of Ker is a broken chain link, which represents breaking the boundaries of order and the destruction of stability.

Ker is the synonym for destruction and death. She is the impersonation of evil, the origin of all chaos. She doesn't tolerate any form of order, because order is a form of stability and stability means stagnation. Chaos is the only valid form of existence and darkness is the only answer to the weak. Ker is fighting an eternal battle against Lumen, the God of light and this battle is the great religious theme in Ancaria. But it's a battle which can not have a winner, for chaos can not exist without order and destruction is impossible without creation. Both deities are eternally bound together, depending on what they hate most. It's their fate to fight their very own counterpart, knowing that annihilating one means destroying the other. A tenacious theory amongst Ancarian mystics says, that Lumen and Ker are actually brother and sister, who are both trying to fight the other in an attempt to be unique.

Ker is described as six-armed woman of unnatural cruelty. She is wearing nothing but three skulls as clothes. She holds the means of her possession in her hands - means of death, destruction and chaos - and shows the observer what she has in mind for him if she talks about loosing his head to her.

Ker is the arch enemy of Lumen, the god of light. These two are fighting an eternal battle against each other.

Although Ker has a huge amount of followers behind her, most of her temples are shrines have been erected in more or less secret places. For obvious reasons, Ker is a feared deity amongst those who're not members of her church, and people tend to avoid any contact with the believers of Ker. Therefore, the church of Ker has to operate furtively in most parts of the world. Ker has quite a number of holy days during the Ancarian year. Most of them are celebrated with bloody, chaotic rituals, which usually include human sacrifices, torture and lots of blood. The exact reasons behind all those feasts are written down in the secret sacred books, the "Codex Ker”. Only the high priests of Ker have access to those books.