The Basics of Damage Mitigation

The Damage Mitigation is an extremely important aspect in Sacred 2 Fallen Angel and its expansion, Ice and Blood. In essence, it means that a certain part of the damage the player takes is completely omitted after all other damage calculations (armor rating).

"Damage Mitigation +x%" modifier is cumulative, which means that values from different sources are simply added to each other (1+1=2) and can reach 100%, making a character effectively immune to a particular damage type.

as a trait on the same item.

Damage mitigation can be obtained in several ways:

1) Through an innate ability of an item

3) Through the Toughness skill

Availability of Damage Mitigation as an Item Modifier

This is a list of Combat Arts that provide Damage Mitigation (some will require modifications to be taken first):

Toughness is a skill that provides basic multi-channel (all five damage types) damage mitigation, as well as additional armor rating per element type, which scales with skill level.

Damage that Cannot be Mitigated

Although damage mitigation can make a character near-immortal, there are ways to circumvent it.

"Additional damage" a character receives through Life Leech is NOT mitigated. In essence, this means that even if a character has 100% multi-element damage mitigation, if he/she gets successfully hit by an attack that has life leeching capabilities, he/she will not receive any damage from the attack, but the additional damage will hit him/her to its fullest extent. That is a very important thing to grasp when utilizing damage mitigation items. Life Leech is a damage type unto itself, separate from any of the five main elemental damage types, and there is no protection from it. The two modifiers which cause Life Leech damage are: 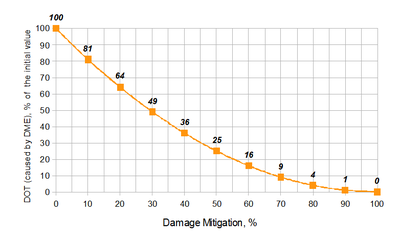 An easier way to understand damage mitigation is to convert it to "Virtual Hitpoints". With the exception of life leech and DoT combat arts, multichannel mitigation can be considered as virtual hitpoints. In essence, that means that if a player with 50% mitigation can take double the damage before they die, at 66.7% mitigation they can take 3 times the damage, at 80% 5 times, and at 90% 10 times the damage. The formula for this equation is as follows:

An in-depth analysis will provide this interesting conclusion:

One may start to wonder if he/she still needs Constitution. It looks like a waste if the player can reach mitigation values above 60% without Toughness. So one may ask him/herself: With only one choice - Toughness or Constitution, what would be the breakpoint in mitigation to take Toughness and not Constitution?

Example: If we put mitigation from Toughness at 15% on a certain skill level and say that Constitution doubles the hitpoints at the same level:

So Constitution is better if:

So if the mitigation without toughness is below 70% constitution would be the better choice.