Sacred 2:Dwarves - do they really exist?

From SacredWiki
Jump to navigation Jump to search
Dwarves - do they really exist?

Interesting Facts about Ancaria
Dwarves - do they really exist?

Do they really exist?

For centuries, reports and legends about the race of the Dwarves have existed all over the world. Countless stories songs, poems and make-believe 'facts' have been told and written about this race. However, the race of the Dwarves appears to be like a deep-water monster that rears its ugly head only once every few years. Nobody truly believes in it - but what if it were true after all? So everyone travels to that location and buys mugs with an image of the monster, uses those mugs as presents for relatives and they end up gathering dust on the shelf. Still, do they really exist, those Dwarves? Or are they indeed simply a myth - created in order to scare little children, conjured as creepy stories by the campfires? In this book i will attempt to solve this puzzle - I will uncover the rumors and name faces and certainties.

Two historic sources allegedly prove the existence of Dwarves. Both are of the same age and derive from the same regions:

First, the "Hailstone Songs" - a collection of ancient texts and poems, dated back to the year 1500 (Old time) by archaeologists. Very few pages still exist, and one of them features a song with the words:


Little man, long beard and hammer,
Whacking iron with a slammer.
Wearing coat and helm from chains,
Eating well 'til none remains.
Belly's bulging, nose is knobbly,
Drinking stout that makes him wobbly.

This song - as well as the entire book - was written in Old-Eruthrean. Thus, numerous varying interpretations and translations of this text exist. Many historians have expressed doubts about the accuracy of the translation; however, they have failed to offer convincing alternatives. Therefore, this fragment is regarded as the initial reference to Dwarves. Still, even if the translation were correct, it would not necessarily mean that the described person was indeed a Dwarf. Visit any village inn throughout the Human territories and you will find dozens of people matching this very description.

The discovery of the "Hailstone Skydisk" in 242 (New Time) added fuel to the fire of the Dwarf-theory supporters. This strange arcane artifact consists of copper and brass rivets and it puzzled researchers for years. Finally, the historian and scholar DeNiken discovered that you have to connect those rivets in a certain order, which revealed this picture: 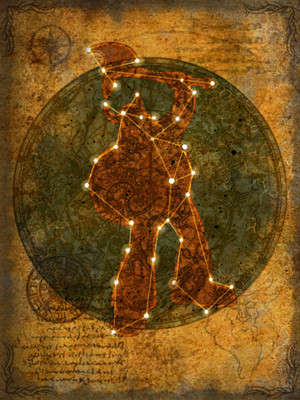 This revelation was a scientific sensation. Even the most passionate critics of the Dwarf-theory had to admit that the Hailstone Skydisk was yet another indication for the existence of Dwarves in the region.

"Eat your food, it ain't so tough,
or Dwarves will grab you by your scruff"
--- Nursery rhyme, traditional

Many myths, legends, ideas and theories about Dwarves are floating around. The face that nobody has ever seen a Dwarf does not convince anyone that they do not exist. Quite the contrary - the common people regard Dwarves as even more mysterious due to that fact. There are many legends about Dwarves entering houses of Humans at night and cleaning them (the houses, not the Humans) while consuming enormous amounts of beer and singing merry songs. Elsewhere, stories are told about an obscure Dwarven cult taking in exiled aristocratic ladies and nursing them. Additionally, the myth "Dwarves" was widely used as a sanctioning tool for children's education: In the northern regions a terrible threat was issued to children that they would be cooked and eaten by Dwarves if they did not behave. A much less sinister approach in the southern regions offers the vision that Dwarves come to pick up baby teeth once they have fallen out, and turn them into diamonds.

Dwarven technology is yet another endless field for vivid imaginations. Supposedly, Dwarves are able to build extremely complex machines. The technological and mechanical capabilities of this race are allegedly very far advanced, and even enable them to build flying devices! There claims prove yet again the absurdity of the stories about Dwarves that are told among the common people.

Another skill associated with Dwarves is the art of blacksmithing. According to common belief, Dwarven steel is supposed to be the hardest and most sturdy material known to mankind. Swords forged at Dwarven anvils, ornate with runes and other magic signs, are apparently the ultimate weapons in the hand of any warrior; there are even claims that they are superior to High Eleven blades.

Approximately 250 years ago, strange circles appeared in the corn fields around Urthak's Moxie. Rumors were spread at the time that the circles were the result of Dwarves having gotten lost in the fields during nights when they were drunk.

More reputable researchers are adamant that the Dwarves did in face exist but they are extinct. A possible reason for this extinction could be the impact of a huge meteorite, which caused the Dwarven mines to collapse. Others assume that a change of climate and the resulting shortness of food resources could be responsible for the extinction of the Dwarves. Finding a reason for an entire race to have apparently dissolved into thin air seems to be even more challenging to scientists than answering the question of whether this race did exist or not.

During all my years of research and studies i have never encountered a single solid proof that the Dwarves really existed. All traces and findings such as the bone samples of Urthak turned out to be forgeries of misinterpretations. Even studying ancient history books did not facilitate a final judgement. Therefore, my approach to this theory is still skeptical. If the Dwarves existed, where would they be! How could they conceal their existence from the world, where are they hiding? Do mines and tunnels exist which are deep and long enough to hide an entire race of people?

Frequently, sightings of Dwarves are reported. However, upon further investigation you will find that usually the probability of such a sighting is closely connected to the amount of alcohol imbibed by the reporter, which does not render there statements very believable. Can you trust these sources? Personally, I highly doubt it.

It remains difficult to prove the existence of a race that has never existed...