Secondary Damage Effects are a damage effect type that a player can inflict on an enemy by using a weapon with a particular type of elemental damage, or Forging specific Damage Types within their weapons, or by using a Combat Art that has the chosen element as its main damage type or even used when mixed with damage types in the Combat Art:

Secondary Damage Effects have a chance to occur when an enemy is hit by a weapon or Combat Art. Burn, Poison and Open wounds inflict a percent of the damage that caused the effect over a time period of 5 seconds (the actual value for effect duration is about 500 frames, which may be interpreted as 5 seconds, but the game applies damage once a second; so in practice the effect deals damage over five seconds in five pulses).

If the effect is caused by a Critical Hit, then the damage inflicted by this effect also increases by 20%. If a Secondary Damage Effect was caused by a failed hit with Spell Resistance/Spell Intensity check, this effect's damage is likewise decreased by 30%. Several different (not similar!) effects stack, so an enemy can suffer from several effects simultaneously. However, only one graphical effect is displayed at any particular time.

Damage of Secondary Damage Effect caused by Close-Combat\Ranged, Weapon Damage-Based CAs and Spell Damage Based CAs is calculated by these formulas:

When triggered, effect will cause periodic elemental damage. The enemy will sustain five hits (each hit 1 second after the other), total damage of which is 20% of the initial blow's elemental damage composition. For example, if the hit dealt 100 damage of pure poison damage and triggered Poison, the enemy would take five hits of 20 poison damage each (100 damage over time in total). This percentage can be modified by Damage Lore skill mastery.

It is important to emphasize: Damage Mitigation protects from SDE twice - first DM reduces incoming flat damage (periodic damage depends on how much damage has received the character), secondly DM reduces damage from incoming periodic damage (open wounds, burn, poison). For example, 50% Damage Mitigation reduces damage over time at 50%, and then another 50 %, a total of 75% mitigation. 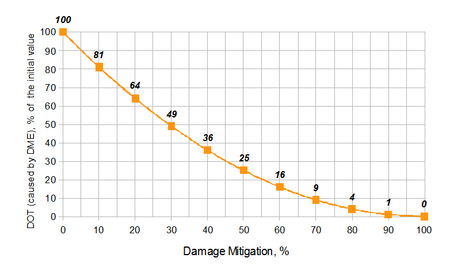 If the defender's willpower value is particularly high, the damage dealt by Secondary Damage Effects will be noticeably reduced. It works only against Spell Damage Based Combat Arts that deal flat damage and have a chance for secondary effects. If an attack inflicts such effects (for example, Burn effect from a Dragon's fireball or Poison from a Kobold Shaman's projectiles) then the duration of the effect on a highly resistant character would, in this instance be reduced. Therefore, the effect would deal only a percent of its original damage.

Defender's Willpower attribute does not affect:

The Detrimental magic effects -x% modifier reduces the duration of such effects as well as damage dealt by them (damage is reduced proportionally to the duration of time). If several bonuses of this kind are equipped at the same time, their percentage does not total together, the final sum can be calculated using the following formula:

In order to resist Secondary Damage Effects, players should look for items with the following modifiers:

Reflected damage will not cause Secondary Damage Effects for attacker.

Only one similar Secondary Damage Effect can be active on a monster at a particular time. The next time it is triggered, the timer will have been reset.

Some Detrimental Magic Effects (Burn, Poison and Open Wounds) are classified as DoT and therefore affected by Damage Mitigation +x% and DoT -x% modifiers as well as by Mastery of Spell Resistance skill.

For one minimal in-game time (1 frame) no more than one hit (of flat damage) on the target can cause a Secondary Damage Effect, and from this hit a chance to cause an efect is calculated. This means that even a million Glacial Thorns, simultaneously inflicting damage, have the same chance to cause Freeze as a single Glacial Thorn.

A variety of effects may be inflicted upon enemies simultaneously. For example, a dual-wielding player whose weapon does fire damage and a weapon which does poison damage, will have the chance to inflict both of the secondary damage effects which are Chance for Burn and Chance for Poison.

Spell-casters have a chance to cause secondary damage effects as well. For example, a High Elf casts a Fireball spell, the initial elemental composition of the fireball is almost all fire element. Each hit against an enemy creates a chance that Chance for Burn will be triggered.

These secondary effects can also be forged into armor using jewelry, but the relevant elemental damage needs to be present in order to inflict such a secondary effect. For example, if a ring with +% chance to burn is worn or forged into an item, nothing will happen unless the player is also performing an action which deals fire damage. The higher the chance for secondary effects of the material used to change the weapon's damage type, as well as the higher the percentage of the chance to inflict a damage type forged within armor, the better chance a player has to inflict such effects.