From The Lore of Monsters
Volume 4

Searching the libraries of the empire for works about Trolls is usually futile. The general consensus states that there is nothing worth reporting about this species. They are too basic, their mind is too dumb. Trolls are huge, aggressive beings living in the Orc territories. Most scholars and adventurers agree that this is all there is to say about them.

Admittedly, Trolls are not the most intelligent creatures in Ancaria. The average vocabulary of a Troll comprises of approximately one hundred words - most of which are variations of the basic needs: eat, drink, fight, procreate. Trolls with the ability to produce complete sentences or solve simple arithmetical problems are few and far between. Still, some individuals stand out from the crowd. The best-known example of a gifted Troll is Trugzk from northern Artamark. He wrote no less than three novels - although short ones - in his lifetime and published them. However, some claim that these novels did not stem from his chisel and hammer but instead, from a mediocre Ogre author. 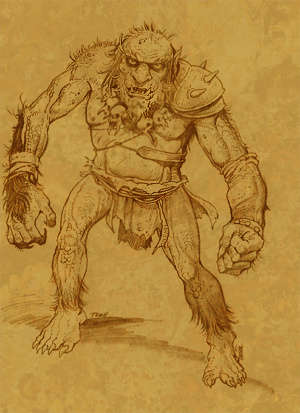 Trolls love to fight. They love to crush their opponents and to devour the dismembered body parts afterwards. Fighting gives the Trolls some kind of purpose in life. Other than that they are peace-loving, even gentle beings underneath. When Trolls are unable to fight - let's say in captivity - they become wistful, withdraw and die. In fact, Trolls never survive for longer than a few years in Captivity while they can reach the age of 150 in freedom. Grotz, who used to live in the area around Orcish Byway for many years, was reputedly 184 years old when he was battered to death in a fight against brigands. 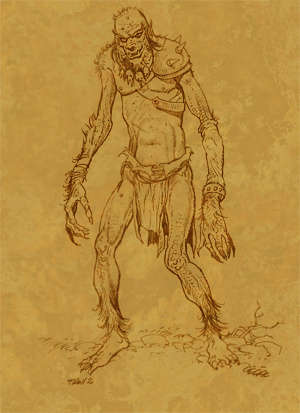 Similar to Ogres and Orcs, Trolls feed predominantly on meat. They are able to consume enormous amounts of meat at once and within a very shot amount of time. Additionally, they eat pebbles and they will not refuse the odd rock or two either. Their teeth are perfectly adapted for this kind of diet. Troll teeth are amongst the hardest materials known to man.

Trolls boast an excellent sense of smell as opposed to their atrocious sense of vision. The short-sightedness of Trolls is proverbial and it is the subject of many jokes and metaphors.