TYPE IN ADDITIONAL INFO. LINKS TO PICTURES, MAPS, VIDEOS ARE PERMITTED IN THIS FIELD. PICTURES OF DIALOGUES MUST BE 430PX WIDE AND SHOULD NOT BE FRAMED. WHEN YOU WANT TO SHOW A TAB MAP AND "m" MAP IMAGE BESIDE EACHTOTHER IN A FRAME THEY MUST EACH BE SET TO 250PX.

KEEP IN MIND THIS SECTION IS MEANT TO HAVE WRITTEN CONTENT AND NOT JUST FOR PICTURES. TELL THE STORY OF THIS QUEST FOR READERS TO ENJOY. BE CREATIVE AND HAVE FUN WITH IT!

PICTURES SUCH AS TO SHOW LOCATIONS SHOULD BE FRAMED AND MUST BE 400PX WIDE. FRAMED IMAGES NEED A SPECIAL LINE OF CODE AFTER EACH WHICH YOU CAN SEE IN THE CODE BELOW; <br clear="both" />

WHEN YOU WANT TO SHOW A TAB MAP AND "m" MAP IMAGE BESIDE EACHTOTHER IN A FRAME THEY MUST EACH BE SET TO 250PX.

DIALOGUES CAN BE CUT OUT NICELY LIKE THIS ONE: 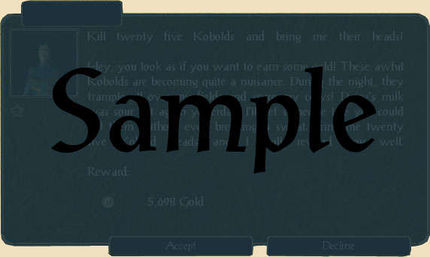 OR CROPPED WITH A FRAME:

QUEST ENEMIES SHOULD BE IMPORTED FROM THEIR OWN PAGE USING THE EXAMPLE CODE BELOW. DESCRIBE ANY SPECIAL ATTACKS THEY HAVE OR OTHER IMPORTANT INFO IF YOU LIKE.

REPLACE THE BELOW WITH THE NAMES OF ANY HIRELINGS OR ESCORTS THAT ARE INVOLVED IN THIS QUEST. BRIEFLY DESCRIBE THEIR INVOLVEMENT. HOW DO THE BEHAVE WHEN THEY ARE WITH YOU? wILL YOU FAIL THE QUEST IF THEY DIE?

I arrived at the camp of the Prince with the alchemist, where he was forced to explain the ritual. According to him, yet another ingredient is required to evoke the Devil's Fire, the blood of a Garganthropod. This giant scorpion lives in the desert south of here. The Prince asked me to kill the monster and return to him with its blood. The creature employs a blue reflective shield. Attacking while this is activated would be futile.

The Garganthropod is dead and I picked up his blood. I'm starting to wonder if the weapon is really worth the effort, all of it mine. Since I have the blood I should return to the Prince, but there better not be any more errands waiting for me!

The Prince was glad to have the last crucial ingredient for the Devil's Fire in his hands. After a most enlightening demonstration I see that this weapon really is incredible. It will create enough fear among his opponents that they won't dare vote against him in the upcoming elections. My work here is done. I should now continue my journey and enter the jungle.

UPLOAD A PICTURE SHOWING THE LOGBOOK FOR THIS QUEST AND REPLACE THIS TEXT WITH A THUMBNAIL OF IT HERE. EXAMPLE: