Sacred 2:The Guardsmen in the Ruins

High on the hill next to the Noriath Temple there is a small camp. This place is perfect for watching the area, and here you can find a person who does so. This camp is too far from the woods, so he can't be a hunter. Maybe he is keeping an eye on some danger? But this land seems to be quite peaceful. Talk to him to learn what he does here. 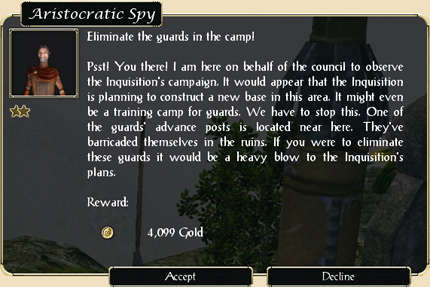 So he is the spy after all. An Aristocratic Spy to be precise. An there actually is a danger to keep an eye on - the Inquisition Forces have begun their invasion into this area. But now when they aren't multiple they can be stopped quite easely. Of course, one spy can't do much against them, but you can.
You head back down the hill where the spy is camped and strike out west until you reach a lake. Then you should head north then west along the lake’s bank until you reach the ruins where the Guardsmen of the Inquisition have set up camp. Of course, you can head northwest right after you come to the bottom of the hill and run across the fields. This path is shown on the map below.

The guards are here. They are patrolling the area a will attack you as soon as you come near.

Kill two Guardsmen and the Officer of the Inquisition Guard that are near the east side of the ruins, then head west through the ruins where you can find the last Guardsman who is observing the area from a hill. Now your task is accomplished an you can return to the spy for your reward.

But looks like the guards weren't the only problem. While you were away the spy noticed something important. Now he has one more task for you. Talk to him to start the next part of this chain.

Officer of the Inquisition Guard