From SacredWiki
Jump to navigation Jump to search
A message delivered

The long trek from Wargfels finally culminates when you met up with Mer-Kil. Once you hand over the note you will receive the quest reward, Shadow Weaver. You can't help sneaking a peak at the note since Mer-Kil was very excited to get a letter from his old friend N'kioam. Knight C4 huh? Looks like you just delivered the next move in what is probably the world's longest chess match. 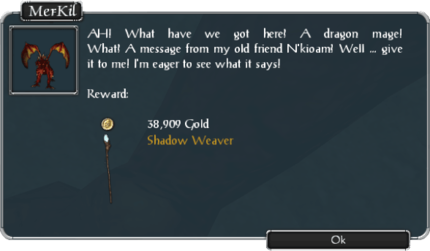 Ah! What have we got here! A dragon mage! What? A message from my old friend N'kioam? Well... giver it to me! I'm eager to see what it says!

To reach Mer-Kil you must also be progressing through the Main Campaign. In order to complete this quest you must have defeated the Carnach, otherwise depending on how far you have gotten, either Mer-Kil will not be there or he will not allow you to complete the class quest. You may have to talk to him a couple times to get reward.