From SacredWiki
Jump to navigation Jump to search
Book 1 - Kybele, Goddess of Nature 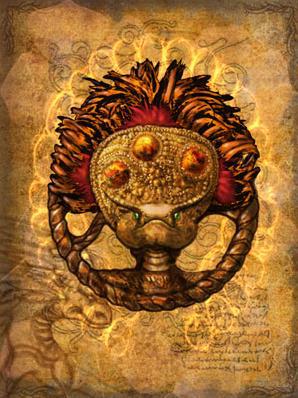 From the Books of Religion
Book 1

Kybele is the Goddess of nature, fertility and motherhood, flora and fauna. She is worshiped by people of all races all over Ancaria, especially by farmers, hunters and in small villages in the countryside.

The mythology says that after the creation of the world, Kybele wandered through the empty and sparse lands, looking for life and a worthwhile, friendly place to be. Deeply saddened by the lack of life and the hostility of the place, she rested below a dead tree and began to cry. The tear dripping from her eye fell down to the earth, trickling into the soil. When she continued her journey, a bud grew from the dead tree. Before long, the desert turned into a green meadow. Since then, every tear lost by Kybele created life or fertile lands.

Therefore, she is also known as the "Crying Goddess" or the "Tear of Life" in some languages and dialects.

Although Kybele has many different shapes, she is most commonly displayed as a feathered, snakelike being with a sad but friendly face. She can change the color of her feathers at will, and often lets her feathers shine with iridescent lights.

Followers and priests of Kybele have erected countless memorial shrines all over Ancaria, although many of them are hard to recognized as one. The church of Kybele does not emphasize grandiosity. Instead, they prefer chasteness and humility, which is consequently reflected in all her shrines. Worldly possessions do not mean anything to Kybele, for the only real and most valuable treasure in the world is life.

The symbol of Kybele is a bead All her priests wear a bead made of stone or wood as a pendant. It represents the life bringing tears of Kybele and the blessing of her sympathy. Members of her cult will occasionally gather around the shrines for collective meditation or celebrations. It is not surprising that spring is commonly considered the time of the year dedicated to Kybele. When plants reach up toward the first beams of the warm spring sun, the followers of Kybele all over Ancaria bring all kinds of sacrifices to her, welcoming her back from her long absence and trying to convince her to stay for a while to restart the cycles of life. The second high feast of Kybele is in late summer, when the fields are harvested and the grapes of the earth are stored for the upcoming winter. This time, they are celebrating their thankfulness and their hopes to see tier again next year.

In the Ancarian Pantheon, Kybele supports Lumen, the God of Light in his eternal struggle against Ker. She is also opposed to Kuan, the God of War.