Sacred 2:Purification of the Temple

The Noriath Temple looks a bit strange - some of its decorations don't suit the Temple of the Gods. Maybe talking to one of the priests would clarify the situation. One of them can be found in the priests' house right next to the Temple. His name is Aleya and he looks quite nervous. Talk to him to hear his story. 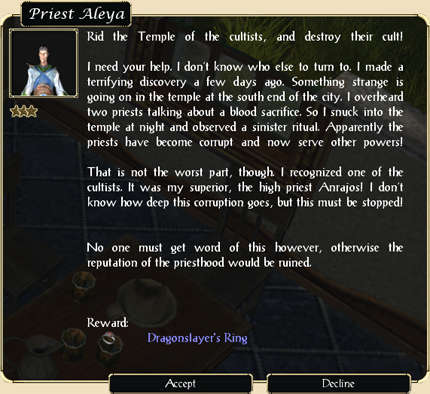 So some cult that has taken over the temple... That explains its strange look. But you'll never let this holy place turn dark, so the cult is doomed. You head from the house to the Temple hoping that the corrupt priests are still there and you won't have to search for them.

From the very first sight it's clear that the cult members haven't left the Temple - they feel quite safe here and simply wander around it. Now it's time to disturb them!

So you go inside and kill 8 Corrupt Priests and their leader Anrajos. They seem to be the only cult members, so now this cult doesn't exist anymore. You should return to Priest Aleya and tell him about the cult's fate.

Alea rewarded you for your deed. Now there is a hope that the good can return to the Temple. However, it seems that Anrajos managed to do enough misdeeds... You can talk to Aleya again to learn about some of them.