From SacredWiki
Jump to navigation Jump to search
Relics

Relics are jewel-like items that can be inserted into a player's relic holder. They are found in a number of different shapes and colors all relating to how they will modify a character's abilities. Relics can be found at a vendor when purchasing armor and are often expensive. They can also be found as drops which often offer higher values than those that can be bought without bargaining.

Each relic will have the following three important characteristics which will help a player choose which to place within their relic holder which can then aid with an overall build's needs or during specific circumstances e.g. Bosses:

The color of the relic will indicate which of the following elements it will protect against:

The shape of a relic indicates the strength of the armor resistance within the offered range. Relics come in various, assorted shapes ranging from round to multi-faceted. The less sides a relic has the higher the chance that it is a relic with lower armor resistance. The more sides a relic has, the better the chance of the relic having a higher value v.s. a specific element. A range will always start from circle, to triangle, to pentagon, with some relics at even higher levels having more facets resembling a jewel, which offer the highest levels of protection.

Normal (white), magical (blue) and rare (yellow) relics will always show the name of one of the following four General Skills with a number listed beside it. The number indicates how many skill points from the relic will be added to a player's statistics for that particular skill. The following skills are offered upon those relics:

However, unique relics (the golden ones) may sometimes show the name of the following four Defensive Skills:

Unique relics may also have an item modifier instead of a skill bonus. The following item modifiers are offered upon those relics:

Note: This item modifier requires Enhanced Perception skill. The bonus this relic gives is much higher than the bonus offered upon jewelry and armor.

The relic holder can be found at the bottom left of the screen and has four sides with a jewel for the god spell in its center.

A player may drag a relic into the relic holder directly from their inventory. Each of the relic holder's four sides may hold up to three relics of any chosen shape or color at a time, allowing for a large variety of combinations.

Any one of the relic holder's sides can be clicked, and doing so will snap the selected side upwards (with an audible sound), will activate all three relics on that side and will also make the three selected holders visibly larger than the other nine. Pressing F5-F8 will also change sides. All properties of relics on the chosen, upwards-facing side will now add the sum of their values towards the player's build. In this way it is possible to enhance certain skills or even increase elemental resistances versus the corresponding enemy elemental damage. A player may manage a total of up to 12 relics to add skill points or build resistances as needed. Many strategies exist.

If a player's priority was to create a relic holder that would give him the greatest benefits regarding protection against the widest variety of elemental damages, he could collect three same-colored relics of each of the four colors, and then as he continued to level he could then simply replace the relics with new relics of higher armor values as the game progressed. This would allow the player to have all four resistances within his relic holder, and by simply clicking on the appropriate part of the relic holder, "snap" the correct relic resistances into place when faced with an enemy of a corresponding type of damage. Against a Dark Archer, for example, since they have high elemental fire damage, a player would click upon the side of his relic holder that had all his fire relics.

This would then activate the fire side of the relics holder. The protection to fire damage would now be activated and can even be seen by pressing "F" and reading the tooltip over Armor.

Skills can be enhanced as well. Relics can be found or purchased that have any of the four above mentioned skills upon them. If the side of the relic holder with three relics all with the same skill on them were facing upwards, the sum of that skill's values would then be added as "soft" skill points to the player's abilities (Soft skill points do not count towards a skill mastery). It is possible to create a relic holder with all four skills enhanced this way and put in less "hard" skill points directly into the build upon level up. 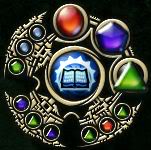 Many combination of skills or resistances can be created by mixing the different colors and skills as needed against specific enemies or to enhance a build. A player could also choose to use three sides for resistances against specific enemies he faces most often, while having the last side left as an Enhanced Perception modifier to increase drops, or Riding to better decrease regen times while mounted...any one of the four skills offered by relics can be manipulated this way. Conversely, another way would be to have three of the relic sides used to enhance skills with only one of the sides used to enhance a single chosen resistance.

A player wanting to prioritize a skill, Riding for example, but needing general protection against three elements, would place, perhaps, three relics of all different colors to correspond to the enemy elemental damage, but have all three same relics also have Riding on them so as to reduce his regeneration. This combination would offer, on one side of the relic, general protection against a variety of damages with that one skill enhanced. Of course, as only one relic will be used to defend against the corresponding damage, the amount of protection it will offer will be less than an entire relic side devoted to one element.

Strong Skills and Strong Protection Per Side Combination

With very careful shopping and especially with the Bargaining skill, even better strategies can be used which can lead to powerful build efficiencies through the consolidation of diverse, sought-after values on fewer relics. For example, if a player had chosen riding as a skill, and was using relics with riding on them to enhance his regeneration from that skill, while playing against Grinch the Frost Dragon(who attacks with magical damage), he could then shop for relics which had both Magic Resistance and Riding upon them. This gives the one chosen active side of the player's relic holder both of the needed values...resistance versus magic damage which that dragon will manifest, in addition to increased levels of Riding. This strategy requires a player to search at vendors more carefully, but by combining both sought after values on one relic, the relic holder's efficiency is greatly increased.

Relics find particularly good use against dragons or bosses. Players knowing in advance which damages an enemy uses will be able to plan, and decide whether to use the resistance or skills properties of the relics.

Relics are slightly different on the console versions as compared to the PC version. Just like the PC, there are only 4 types of relics in the consoles with the same 4 general skills. However, unlike the PC, there is no relic holder. Relics are equipped by entering inventory and finding the relic page, this page will list the relics the player currently has. From this list a player is allowed to equip six relics, but only 3 of one type.

The Community Patch adds special relics known as sigils which form sets and can provide special bonuses when placed in the relic holder.